Tracking the 1918 Flu Pandemic in Print

A Note from the Teacher

This page originated at apush.omeka.net/2020. ≈ This year’s digital project was shaped by the novel coronavirus, both in terms of subject matter and workflow. Separated by remote learning and working in a very limited time frame, this year’s students did not have the opportunity to closely collaborate or determine the general direction of research. Nonetheless, their work was carried out with precision in an effort to add something interesting to the historical record. Their findings reveal how newspapers determined what and when Americans learned about a fast-spreading and deadly virus. 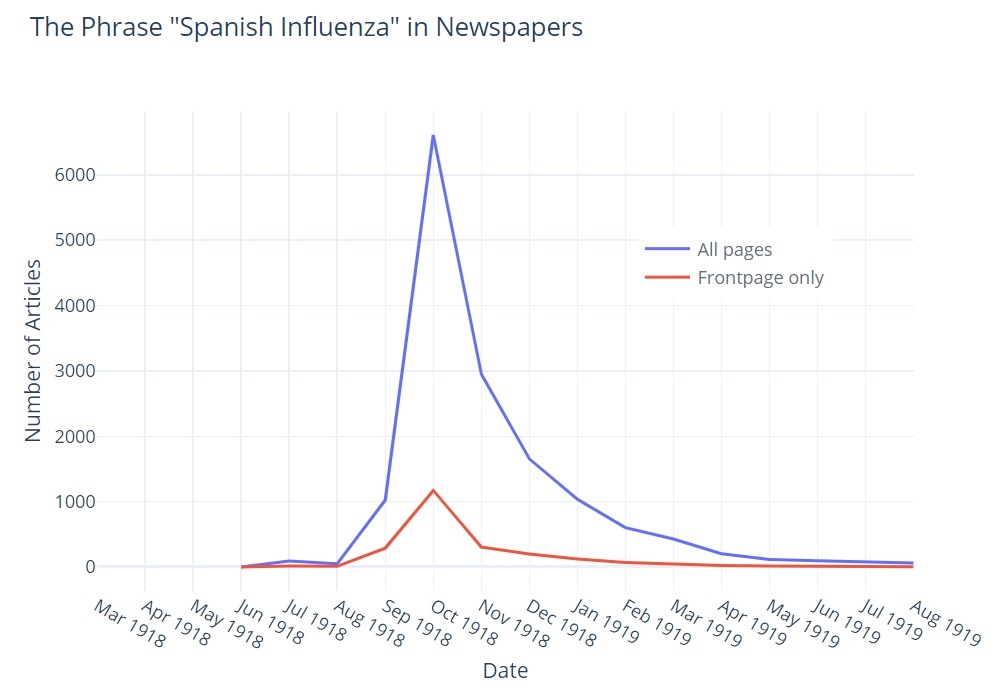 This project’s data is meant to provide insight into how newspapers in America covered the 1918 flu epidemic and when Americans became aware of the epidemic. In the first part of the project the class determined the number of newspaper articles that mentioned Spanish Influenza each month for a year following the likely start of the epidemic in America in March 2018. To be more precise, we initially searched for the frequency of the phrase “Spanish Influenza” in any page of a newspaper as well as the first page specifically. We reasoned that amount of front-page coverage newspapers allotted for the epidemic in comparison with the amount of general coverage could be used to help determine the general attitude that newspapers were propagating about the epidemic—the view of the epidemic as a serious threat to American life or the view of it as perhaps an inconvenience. We collected data mostly using the Library of Congress’ Chronicling America historic newspaper database. This first graph shows that the majority of coverage was found throughout secondary newspaper pages, with substantially less coverage on front pages. Yet, both show the peak of the coverage was found in October 1918, what is commonly considered the height of the epidemic. There was a sharp increase in use of the phrase leading to October and a sharp decrease following the month. This research, when used in conjunction with the individual student research listed below, begins to reveal the extent and nature of the coverage that newspapers provided Americans during the epidemic. — Overview by Noell and Alexa; graph by Bella

Life Expectancy During the Epidemic — The Spanish Influenza was brought to America as a result of the return of US soldiers following WWI. As the majority of soldiers would return in the summer of 1918, many newspapers questioned the severity and urgency of the flu, as can be seen in the research by Johnny and Kaeden. Many newspapers saw the Spanish Influenza as a new form of grippe or a common cold, while in reality the flu would turn into one of the most dangerous pandemics in world history. In my study I found the population of the US, the average life expectancy of both men and women in the US, and the number of articles published that contained the phrase “Spanish Influenza” in the US. The data collected is designed to show de facto statistics of life and death, rather than more rosy interpretations released by some newspapers. The statistics show that as the majority of soldiers returned to America in the summer of 1918, the fall months that followed came to be the most deadly as there was no immunity to protect the American people. This data was collected by using the Chronicling America database as well as two outside sources: Life Expectancy in the USA, 1900-98 and Historical National Population Estimates. — by Harper

Coverage in Different States — Using both U.S. Census data from 1918 and data sourced from Chronicling America, we compared the estimated population of a given state in 1918 to the number of newspapers publishing the words “Spanish” and “influenza.” We also found data surrounding the total number of newspapers published per state that year. We chose the three with the largest populations and large urban areas (New York, Pennsylvania, and Illinois) along with three states with much smaller populations (Arizona, Delaware, and Vermont). As shown in our visualization, the usage of the terms “Spanish” and “influenza” remained relatively constant per state, despite a large difference among population sizes. The total number of newspapers drastically outweighs the number of newspapers covering the pandemic during 1918, yet the percentage of coverage had no drastic changes in relation to the total number of newspapers (ranging from 2.5% to 5.5%). However, the level of coverage of the outbreak was far superior in smaller states compared to larger ones. Although the content of the newspapers was not investigated, this lack of information among highly populous areas may have ultimately contributed to the rapid outbreak of the Spanish influenza in 1918. — by Bella and Alexa

Coverage in Two Different Newspapers — We determined the number of newspaper articles that mentioned the phrase “Spanish Influenza” for each of two newspapers for which there is searchable data on Chronicling America. We looked at each month in the year following the start of the epidemic in America. This data is meant to illustrate both the importance that each newspaper accorded to the Spanish Influenza epidemic, which could then be compared to the actual severity of the epidemic in each of the states where the newspaper was published, and it can also be used as guidance for when the “peak” of the epidemic hit those states. This data was compiled into a spreadsheet using Google Sheets and then was made into a line graph, created using Plotly, that visually shows the difference in articles quantity per paper. The data shows that most states experienced a peak in interest in the epidemic in October 1918. The data also shows that The Evening World, a New York newspaper, published the highest number of articles regarding the epidemic, which was expected since the epidemic was severe in that state. — by Alex and Noell