This page originated at apush.omeka.net/2022. ≈ The 2022 project, which was shaped by an appreciable interest in music among several students, examines the psychology of song lyrics. While similar to the 2021 project, which looked for particular themes and positive or negative tone within historical documents, this year’s project sought to measure a wider array of sentiment, including self-focus and social connectedness. Relying on the output of the free version of LIWC, the Linguistic Inquiry and Word Count analysis software developed at the University of Texas, students developed psychological profiles for songs and evaluated the profiles relative to their historical contexts.

Before examining songs historically, the class first looked at song lyrics more generally. In order to become familiar with the LIWC instrument, students compared psychological markers present within three music genres: grunge, reggae, and country. Using lists of top songs found on the web, along with other lists subjectively assembled to include songs most representative of each genre, the class found some expected and unexpected results. Although, based on LIWC output, aspects of each psychological profile seemed to largely coincide with each genre’s fundamental characteristics (e.g., a protest spirit within reggae (moralization and social words) or anti-social cynicism associated with grunge (i-words and negative tone)), it became clear that individual songs can be clear outliers. The grunge genre, for example and as expected, scored above average in negative tone and below average in social words. But the popular Nirvana song “Smells Like Teen Spirit” greatly defied expectations, scoring extremely high in positive tone and thereby elevating the overall genre unexpectedly in this category. The song’s repeated use of the word “hello” apparently overloaded LIWC dictionaries with contrary indicators and tricked the LIWC algorithm into classifying Nirvana’s language as emotionally positive. These findings, discovered by students and illustrated by students in the following graphs, set the stage for additional and more historical investigations that also appear below. 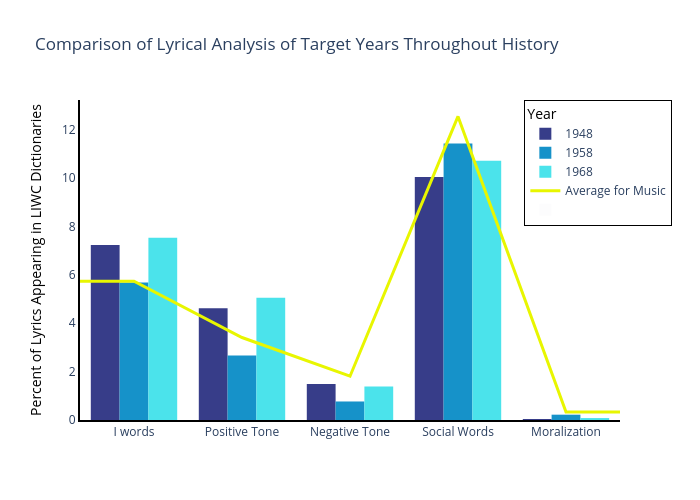 Comparing 1948, 1958, and 1968 — For our individual projects, our group compared the top twenty songs from three different years using Billboard. We chose the years 1948, 1958, and 1968, in an attempt to discover a growing counterculture and turn-to-rebellion movement in the late-50s and early-60s, as reflected in song lyrics. 1948, we reasoned, would represent the homogeneous post-war period, in which we expected song lyrics to display high positive tone and social words, while displaying a low negative tone. We then chose 1958 because it marked the beginning of the space race, which played a major role in the Cold War. We expected this to show a somewhat higher negative tone, but overall closer to the averages. Additionally, we chose 1968 because it was the height of Vietnam, with the Tet Offensive gaining major backlash in the U.S. We expected this to show very high negative tone and moralization, while showing a low positive tone. Each person then chose a specific year, and ran the songs separately through the LIWC analysis in an attempt to find any outliers. We then compared the data using averages for each list (see bar graph). Using our data, we discovered that there was no major difference between 1948 and 1968, which was a surprise based on the historical events that occurred during these years. The one notable outlier is 1958, which is lower than the other two years in more than half of the categories (i.e. I-words, Positive tone, and Negative tone). However, our prediction for the year was mostly right: it was the closest to the LIWC average for music. Yet, it did have a lower negative tone, which could be attributed to the nuclear-family era which had a booming economy. 1948 does make sense historically with the positive tone being higher than average. 1948 was a post-war era filled with positivity and patriotism. However, the most confusing year was 1968, which showed a positive tone that was well above the LIWC average and beyond the other years we analyzed, which were historically happier periods of time. One speculation for this is that music is seen as a sense of hope or happiness in such a dark period. Furthermore, there was a “silent majority” of Americans who were against the counterculture and wanted a more homogeneous and drug-free society, which could have had an effect on music lyrics at the time. Additional data visualizations: graph 1, graph 2, graph 3. — by Nick P., Cam, and Brynn 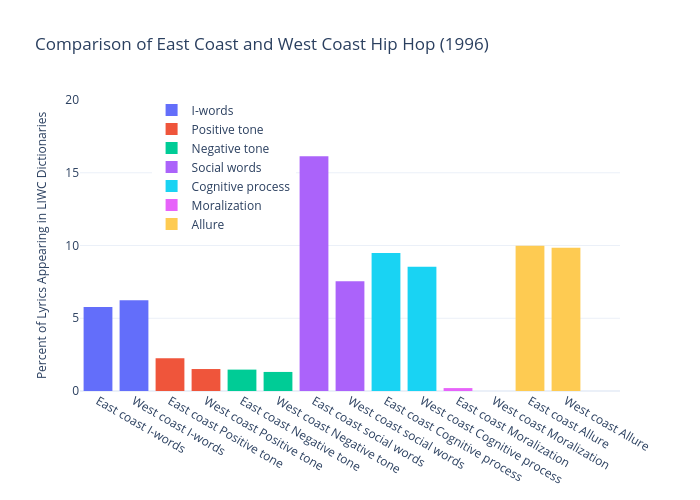 East Coast and West Coast Hip Hop — Following the Civil Rights movement of the 1950s and 1960s, and following cuts to Great Society programs during the Reagan administration of the 1980s, African Americans found themselves in worsening economic and social conditions. The combination of white flight, decreasing economic opportunities, and a deepening of the wealth divide caused a surge in anti-establishment, negative sentiments in urban communities. Those who spoke out, with song, started to spread their message through the emergence of hip hop. The 1990s were known as the most influential decade of hip hop, specifically the year 1996. Within this decade the genre faced a huge divide and rivalry between West Coast and East Coast rap. For my individual project I chose to analyze the difference in lyrical sentiments between East and West Coast rap, hoping to see a difference in sentiment. To achieve my findings I used the LIWC word analysis tool to determine the overall sentiment in each category. I found the average of each style of rap by plugging in the lyrics of the top 5 songs of the year 1996 for each style into LIWC. After expecting there to be a greater difference in sentiment, it was surprising to see that the two styles of rap were generally very similar based off of the LIWC dictionaries. The one thing that stood out was the significant difference in percentage of social words in East Coast rap. East Coast rap showed 16.14% of social word use, compared to the West Coast’s 7.54% social words. After re-analyzing the songs that I chose for the East Coast genre, I found that the high score on the social words was mainly based off of one song swaying the results. The song “Shimmy Shimmy Ya” made the social word percentage of East Coast rap increase significantly. After eliminating that song and then re-analyzing the text, the percentage of East Coast rap returned back to a very similar percentage as West Coast rap. After completing this analysis it further proved the point that there are some outliers that can skew the results in the LIWC dictionary. — by Emma 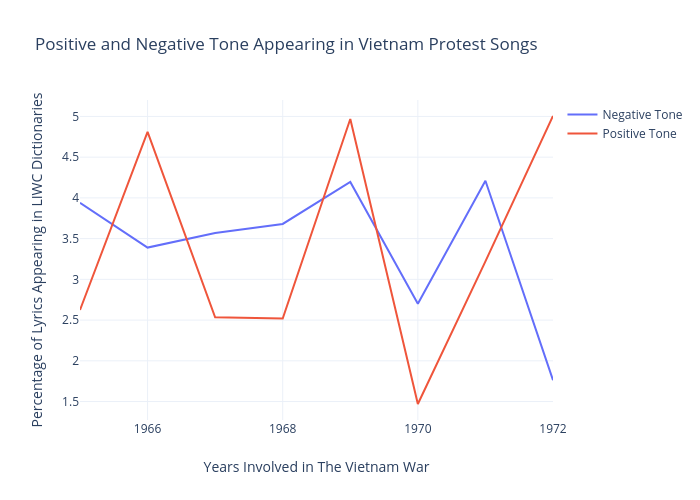 Protest Songs During the Vietnam War — To understand the sentiment of anti-war protesters during the Vietnam War, I chose to analyze anti-war songs from the years 1965 through 1972 and see which was the most negative year. To help illustrate this I made a graph showing the negative tone and positive tone in the songs over the chosen years. I picked 1965 as the start date since it was one year after the escalation of the war and allowed for songs to be produced, and I chose 1972 as the end date because it was three years after Nixon entered office, and the announcement of Vietnamization. I chose five songs from each year and analyzed them to understand which year was the most negative, and the most positive. I expected for the graph to show a steady increase in negativity, and eventually a decrease in the later years when soldiers were pulled out. 1970 as a low year is somewhat expected because of Nixon’s election and the announcement of Vietnamization helping to calm the tension. 1969 and 1971 make sense for the two highest years because of events such as Woodstock in 1969 and the Tet Offensive in 1968, and the Pentagon Papers being leaked in 1971. The positive tone in the songs showed no definitive pattern and lacked data to draw conclusions. This could be due to the LIWC software not picking up on sarcasm, slang, or songs calling for peace being portrayed as positive. — by Nick B. 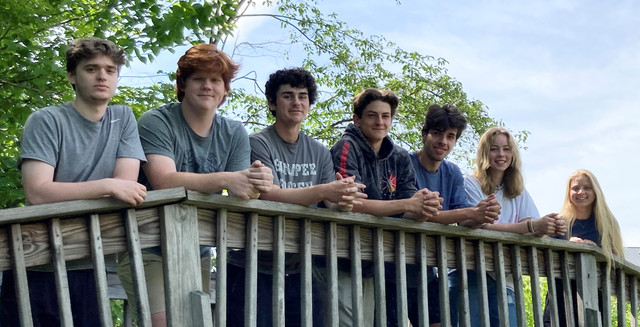